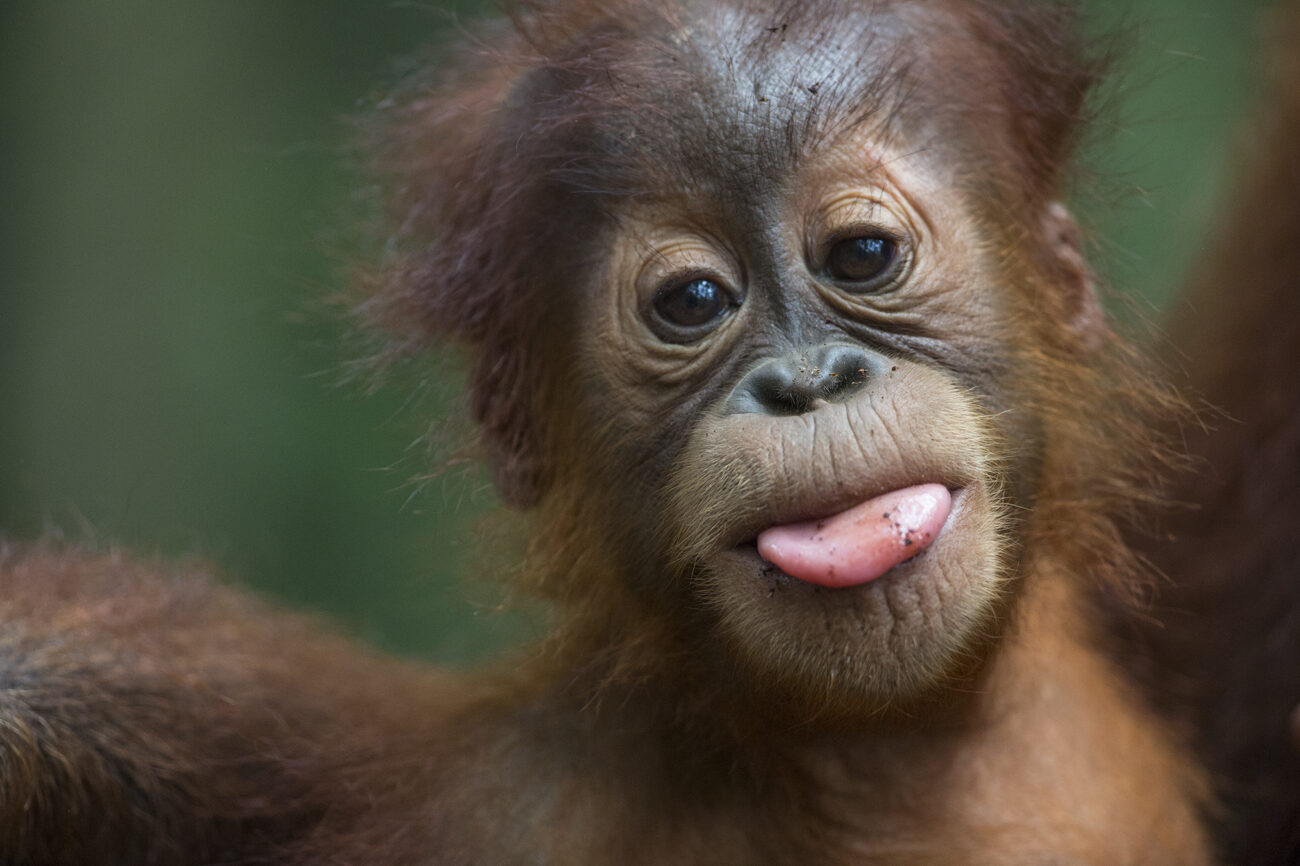 People Of The Forest

Found only in Indonesia and Malaysia, these intelligent apes are known by the local name orang hutan – literally ‘people of the forest’

Orangutans are the only Asian great ape and share around 96.4% of their DNA with humans. Once widespread across southern Asia, they now only survive on the islands of Sumatra and Borneo. 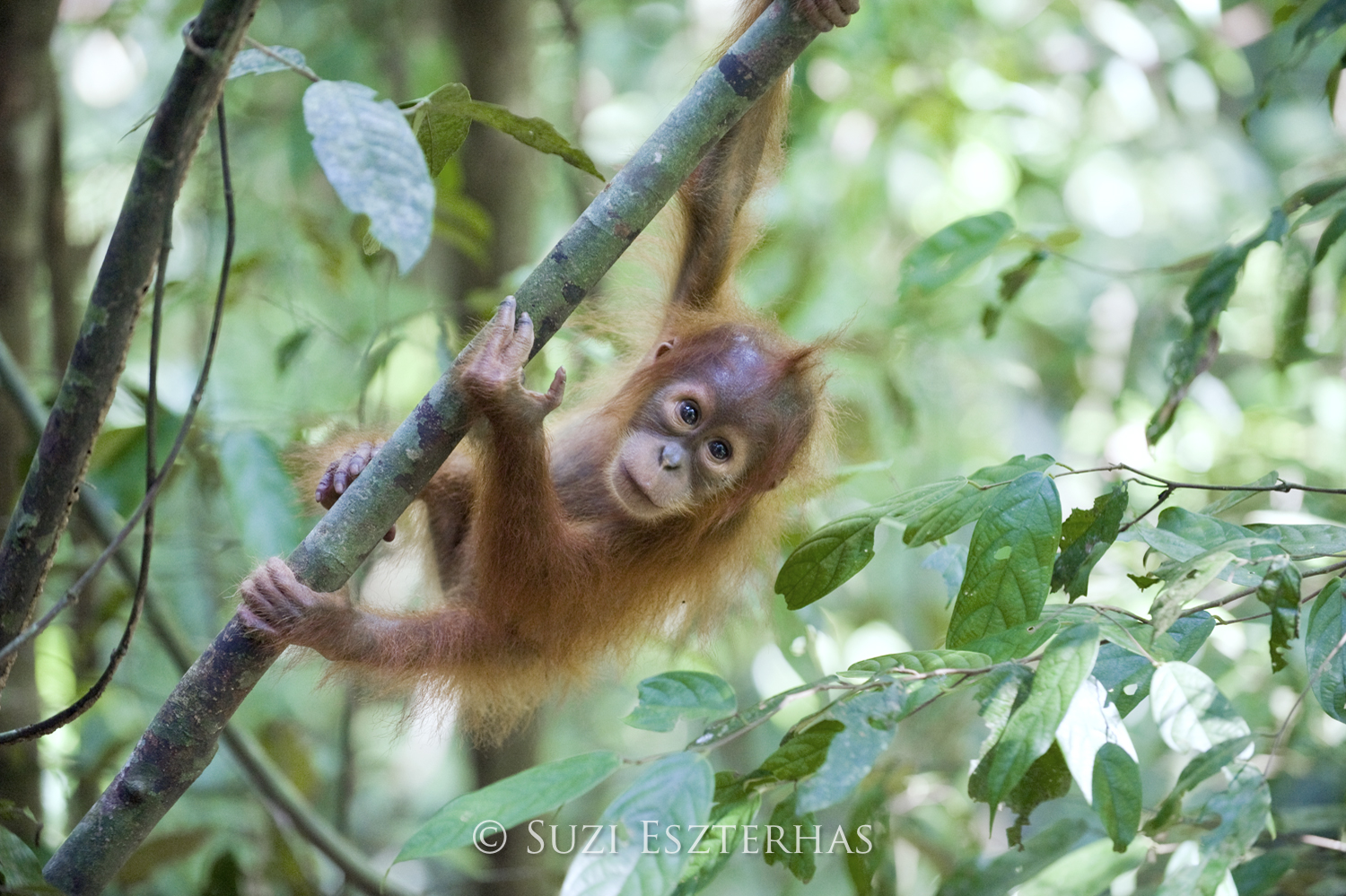 The orangutans on Sumatra are almost entirely arboreal (so they can stay safe from the tigers – Sumatra is the only place on the planet where orangutans and tigers co-exist), A total of 90% of their food comes from the forest canopy: they feed on hundreds of different plants – figs and durian fruit are among their favourites. They help to spread seeds in their dung which promotes forest regeneration.

Every night orangutans build a new nest to sleep in, creating gaps in the canopy which allow light through and stimulate plant growth in lower forest layers. They are known as ‘gardeners of the forest’ because of the vital roles they play in supporting and maintaining the ecosystem. 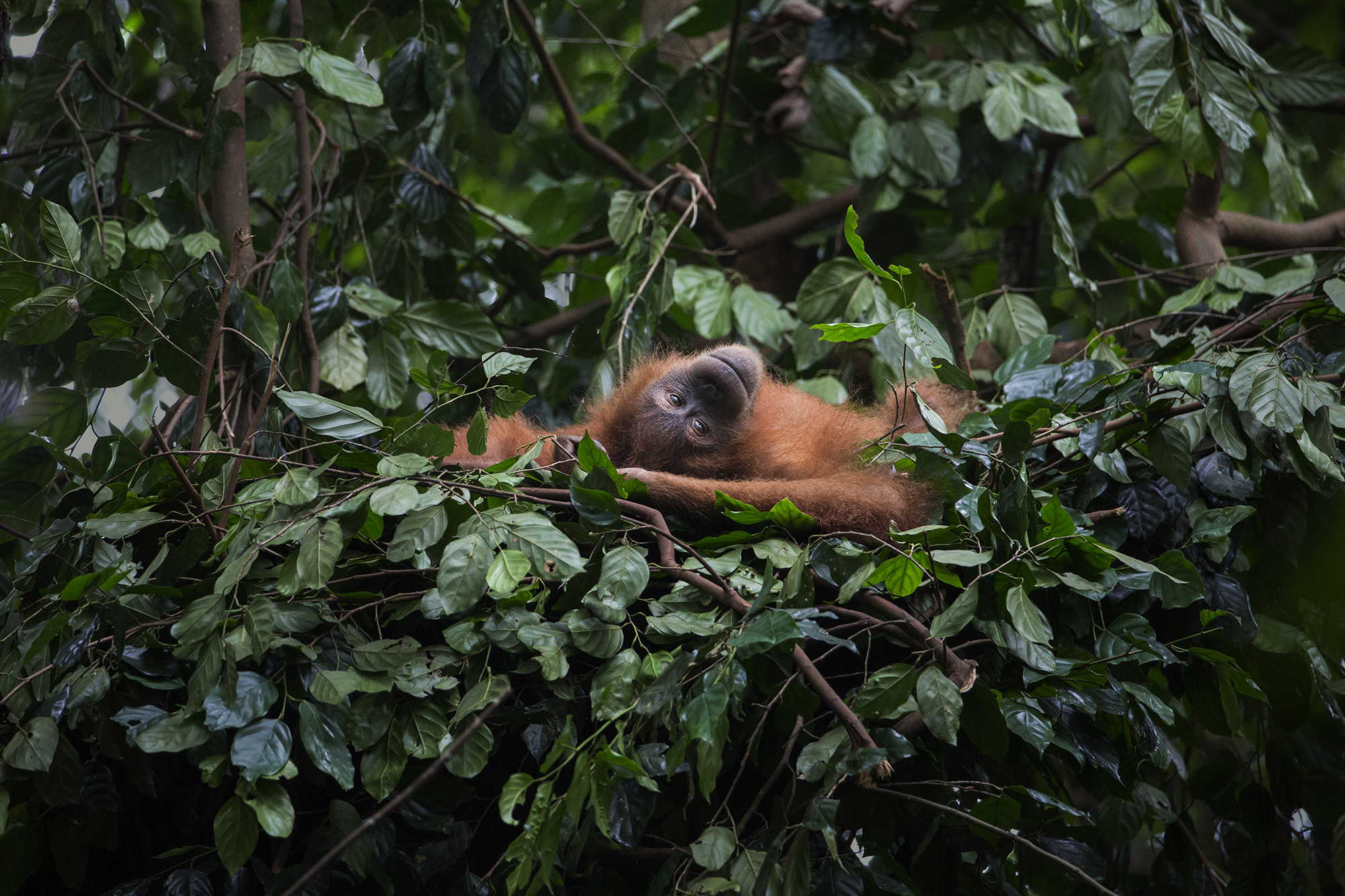 Orangutans are amazing creatures deserving protection in their own right, but there are also practical reasons to conserve them.

The key to saving orangutans is preserving their forest home. Without this they cannot survive, and without them the forest would lose a key ‘gardener’ which helps to maintain the health and resilience of the ecosystem. This is also crucial habitat for many unique and threatened animals such as the Sumatran tiger, rhino and elephant, as well as countless birds, insects and other creatures. So, by protecting orangutans we are also protecting thousands of other species – the entire biodiversity of the tropical rainforest.

The forests also perform vital ecosystem services for communities around them and further afield. They act as crucial watersheds, absorbing huge amounts of rainfall and releasing it steadily to ensure a regular water supply downstream whilst reducing the risks of floods, landslides and soil erosion. They also support agriculture by regulating the local climate and provide many resources which can be harvested sustainably by forest-edge communities.

At a global level, Sumatra’s intact rainforests and the soil below them are huge carbon sinks. Protecting orangutan habitat is a vital natural climate solution that will help to achieve Indonesia’s goal to cut emissions and adapt to climate impacts, as part of the country’s 2030 climate targets. 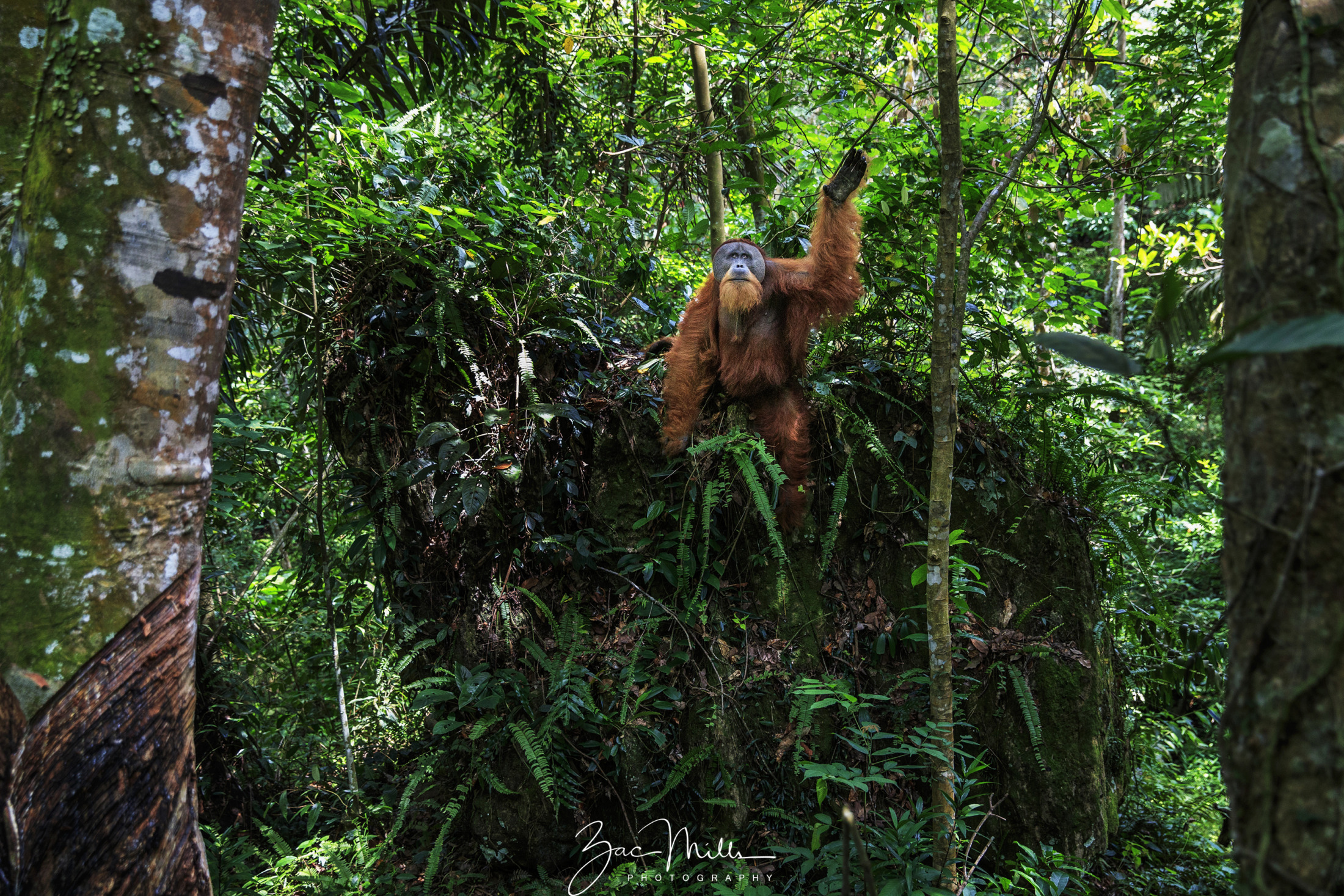 Orangutans are a semi-solitary species, which may have evolved as a result of the unpredictability and scattered nature of available ripe fruit – their staple diet. Orangutans spend 60% of their time foraging and eating.

The relationship between a mother and her child lasts for many years, but the time spent with other orangutans is limited. Once adolescent orangutans become independent, they will live alone or just spend time in the company of other immature orangutans. In the case of females, they frequently return to their mothers to ‘visit’ until they are about 15-16 years old. 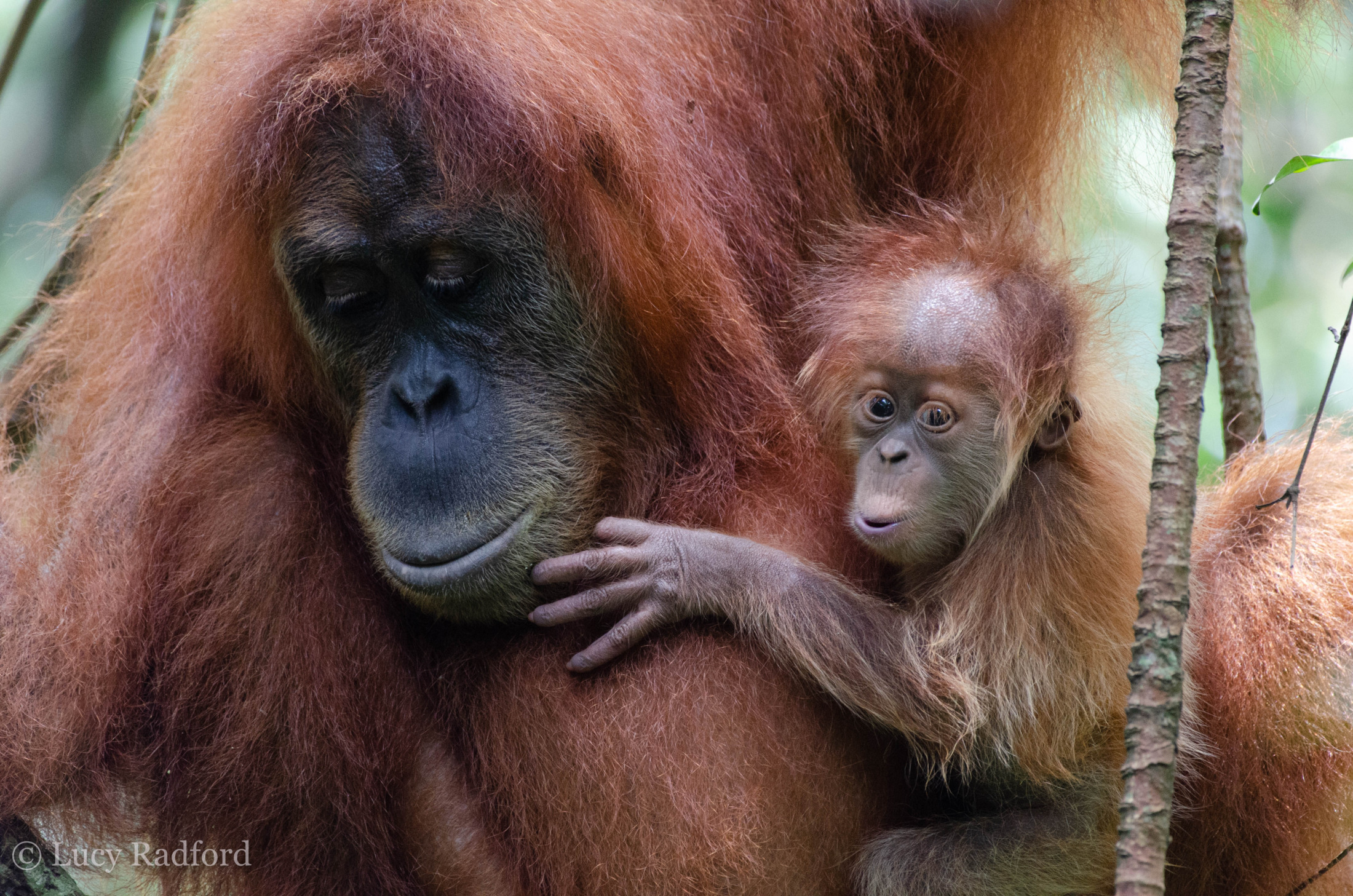 Males who are not yet fully mature tend to associate with other females, particularly adolescents. Flanged adult male orangutans are the most solitary of all, their social interaction is usually limited to mating encounters with receptive females.

Male on male competition for access to females is a major factor in orangutan society. Flanged males have the ability to use their pendulous throat sacs as a resonating chamber for the unmistakable ‘Long Call’ – a truly remarkable sound which can be heard up to a mile away and signifies their flanged status to attract females. 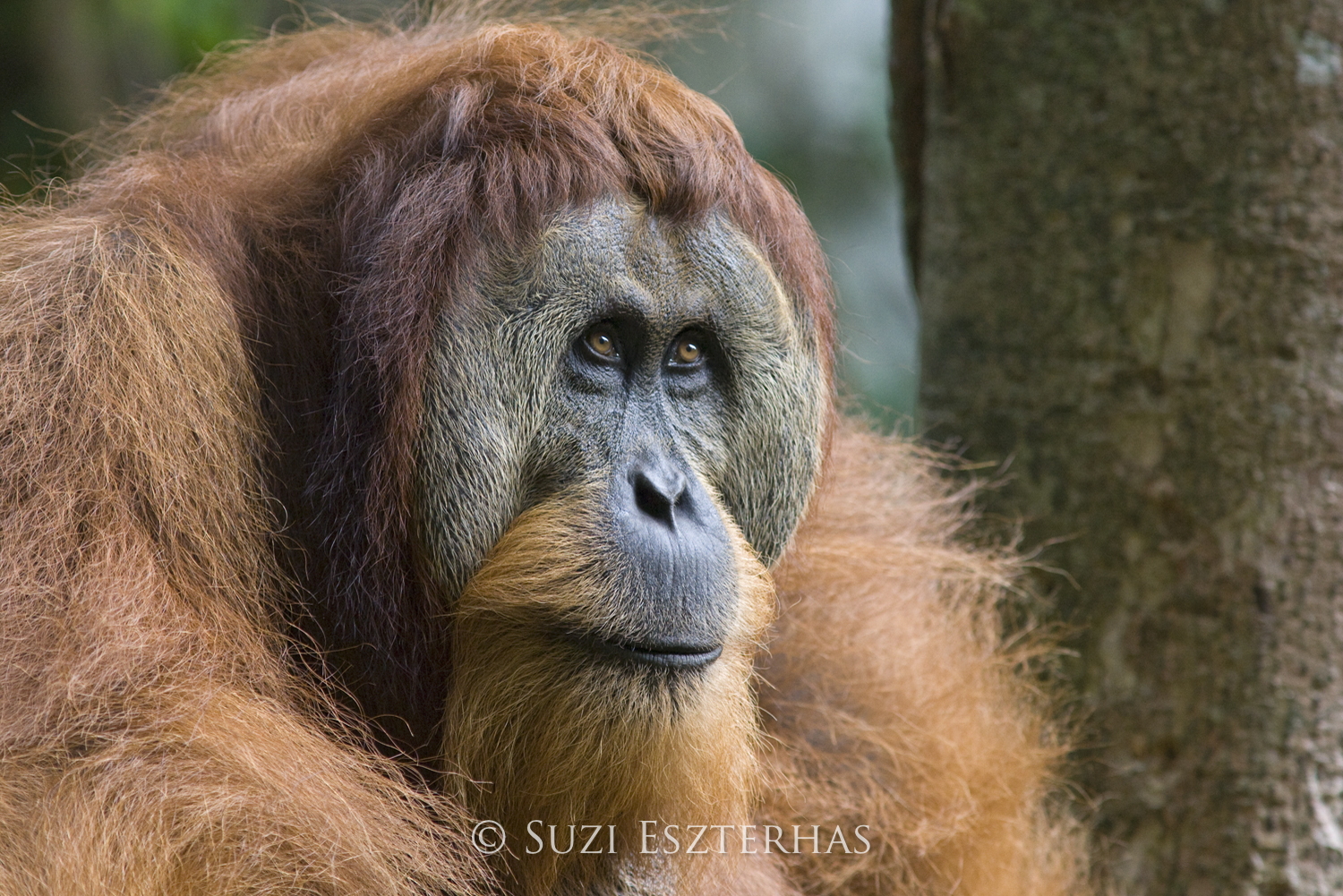 Orangutans have the slowest known life histories of any mammal. They take the longest time to grow up and they are the slowest to reproduce.

Orangutans breed more slowly than any other primate, with the female having a baby on average only once every 7-8 years. The gestation period of a baby orangutan is approximately eight and a half months. Single births are most common and babies tend to weigh about 3 ½ pounds. Infants are dependent on their mothers for at least five years, learning about survival in the forest.

For the first two years of a young orangutan’s life, the baby is completely dependent on its mother for food and transportation. A baby orangutan clings to its mother’s stomach, side, or back while she moves through the trees, and feeds on her breast milk. 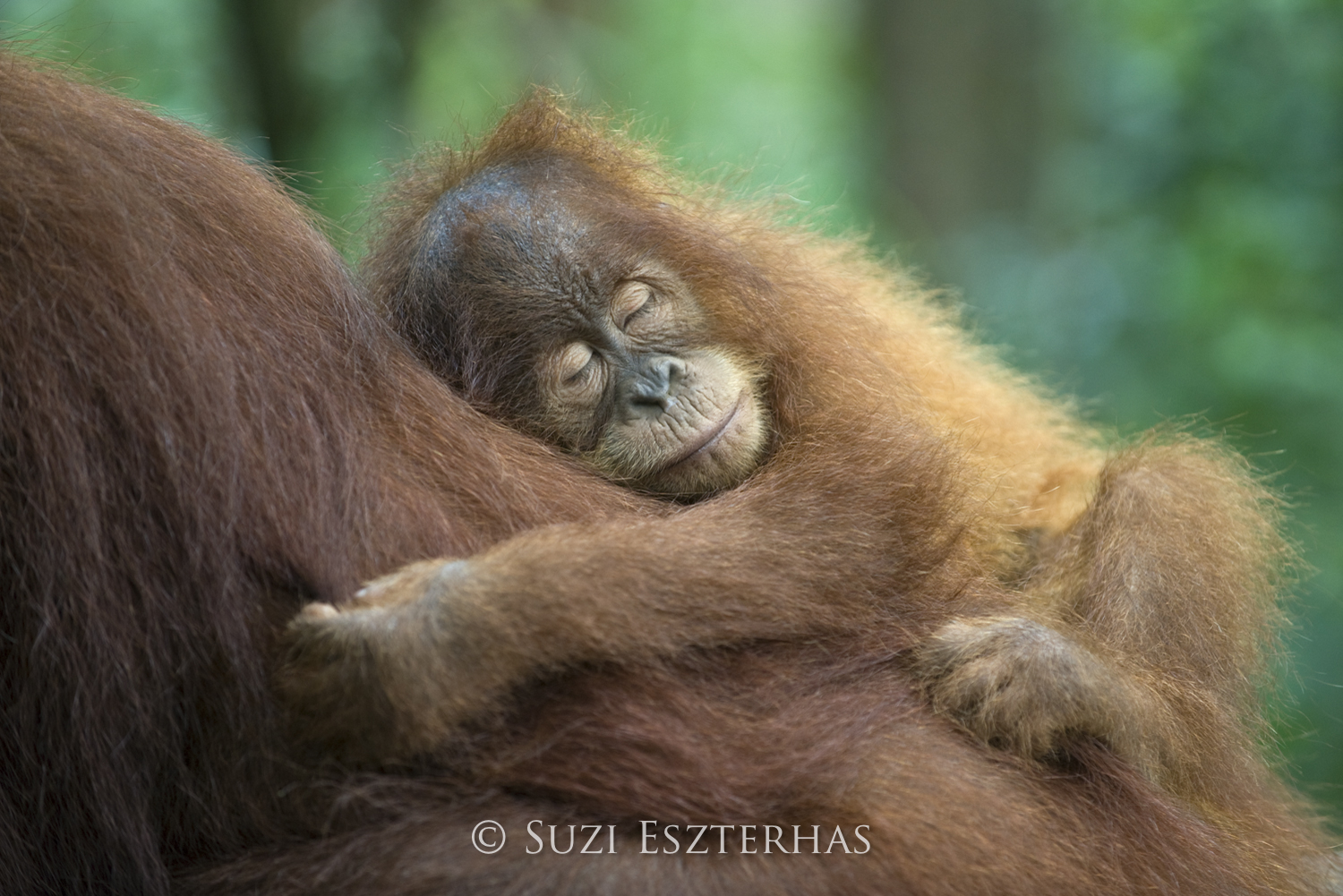 Wild female orangutans usually become sexually active at approximately 12 years, but they will often have their first offspring only at 15-16 years of age.

Orangutans live for around 45 years in the wild, and a female will usually have no more than 3 offspring in her lifetime. This means that orangutan populations increase very slowly, and take a long time to recover from habitat disturbance and hunting.

Such a long association between mother and offspring is rare among mammals. Probably only humans have a more intensive relationship with their mothers. Primatologists believe that orangutans have such long childhoods because there is so much that they need to learn before they can live alone successfully. Young orangutans learn almost everything from their mothers, including where to find food, what to eat and how to eat it, and how to build a proper sleeping nest.

Orangutans have significant cognitive abilities in comparison to the other great apes. This high level of intelligence manifests itself in tool-use and even the making of simple tools in the wild. Some tool use is unique, but other kinds of tool use represent cultural traditions in orangutan populations.

In Sumatra, wild orangutans use tools to extract seeds from hard shelled species of fruit. 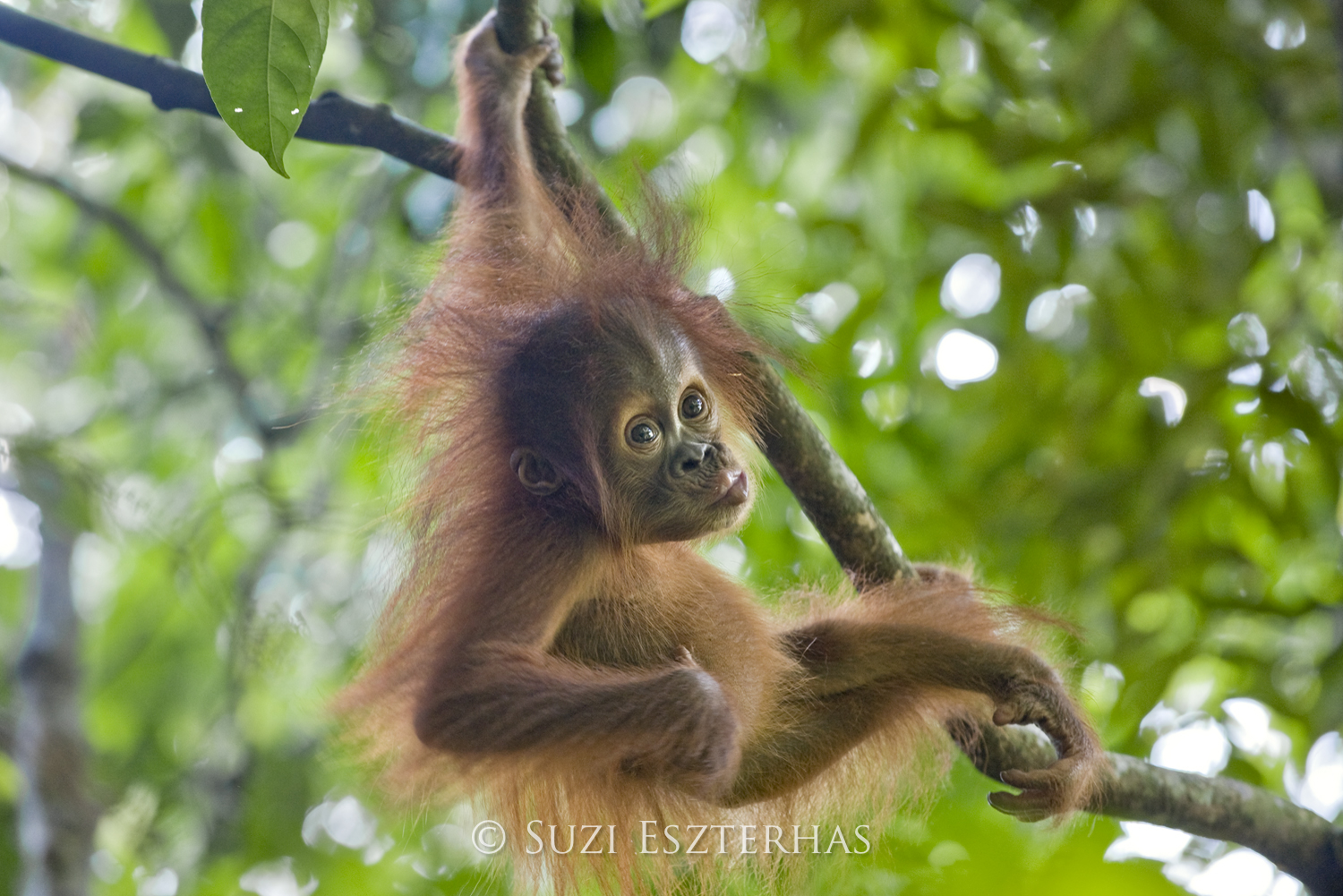 We think orangutans are amazing! Please help us to protect these incredible, gentle, wise, long-lived apes. A donation of £10 a month will help towards our vision of wild orangutans thriving in resilient forests. We can’t do it without you, please consider committing to this valuable, ongoing support today. Thank you. 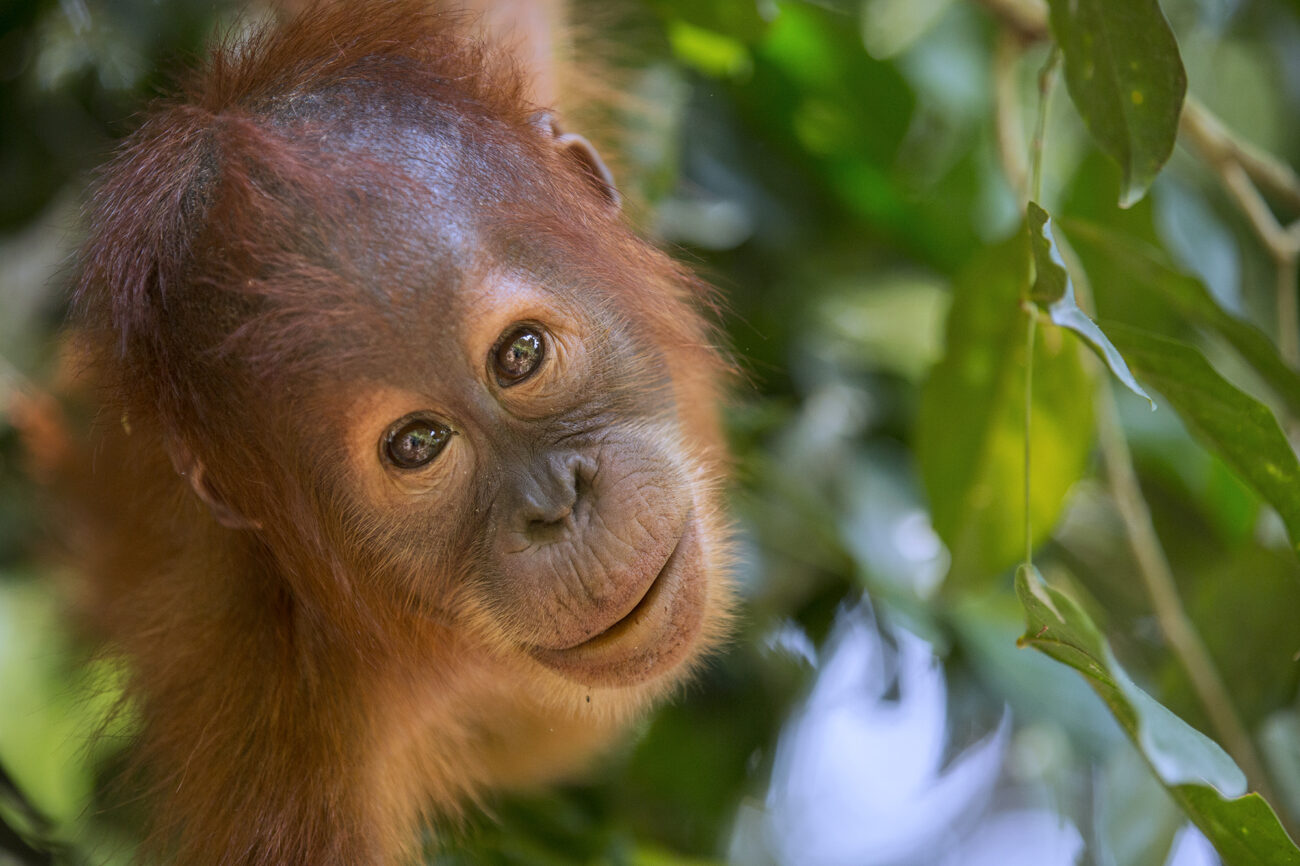