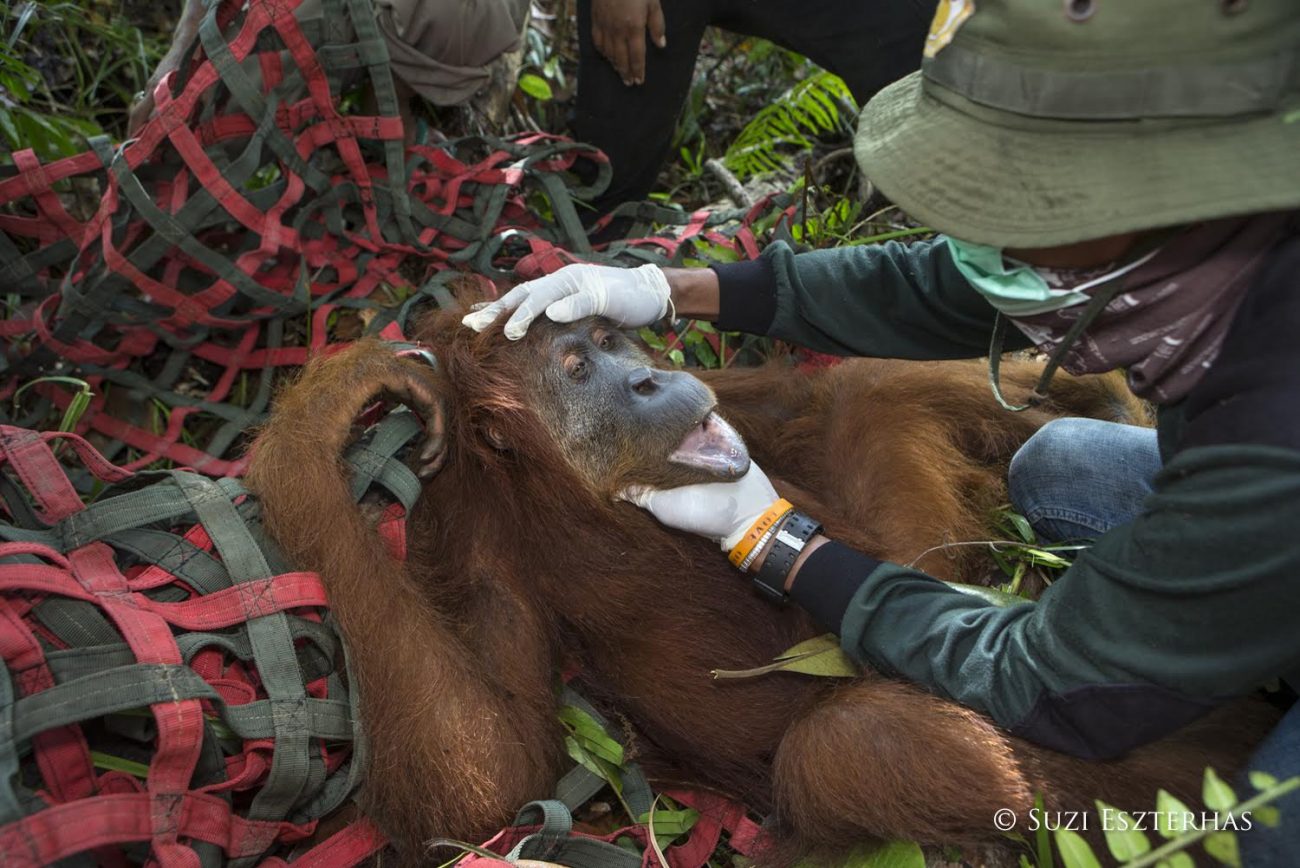 Suzi Eszterhas is an award winning conservation photographer, and Patron of SOS. In October she travelled to Sumatra to shadow the orangutan rescue team, and here she shares her images and impressions from a rescue mission.

In October Suzi traveled to Sumatra, the large island in Western Indonesia to photograph the rescue of orangutans by the Human Orangutan Conflict Response Unit of the Orangutan Information Centre in Sumatra. The OIC’s focus is to “save the lives of Sumatran orangutan from life-threatening situations and to sustain their survival by partnering with the local communities who live alongside orangutan habitat.”

This project is part of Suzi’s work as a patron of the Sumatran Orangutan Society (SOS), a UK based charity working to save these critically endangered primates. There are only 14,600 Sumatran orangutans left in the world, mostly due to deforestation of their habitat. 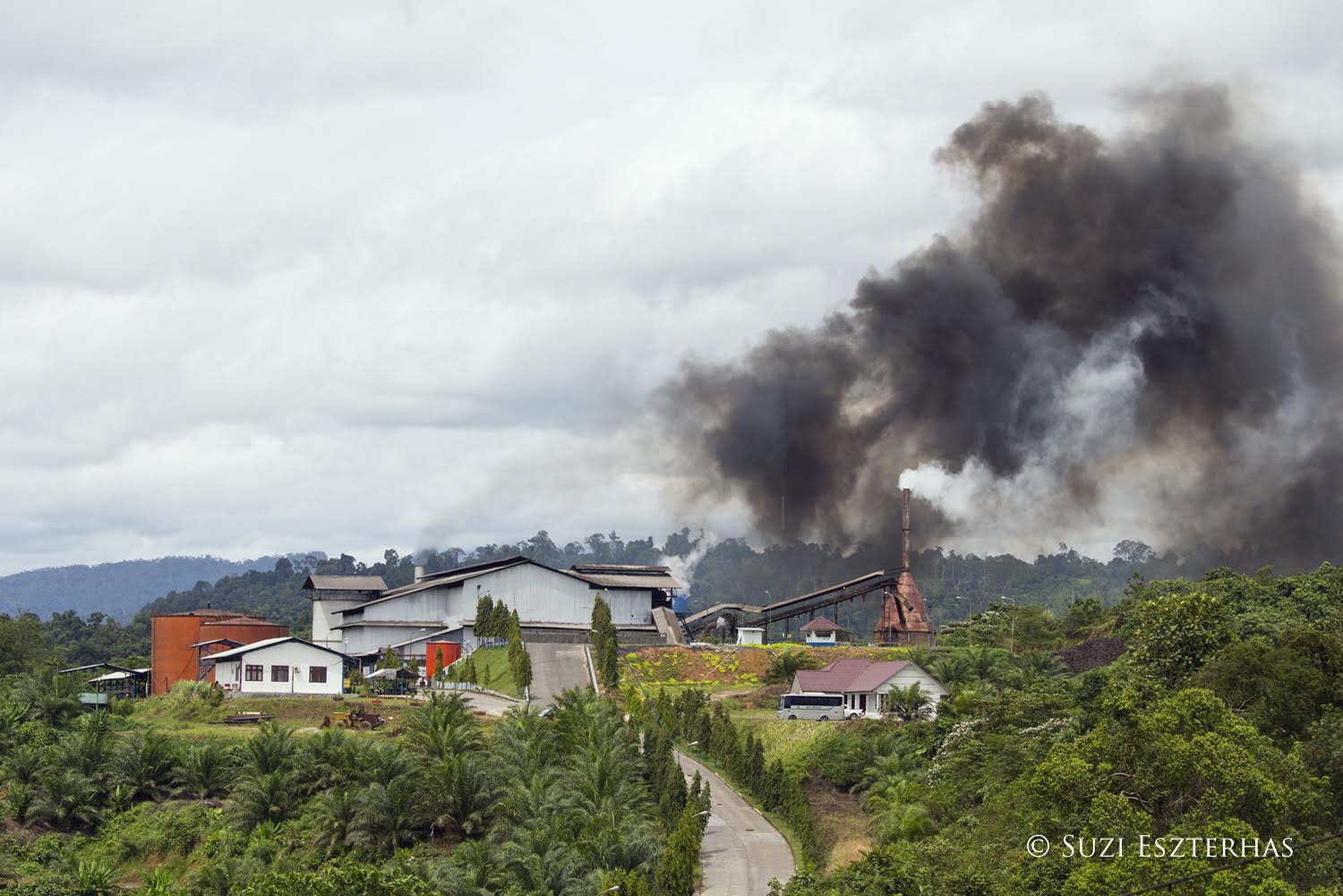 Clear cutting of the Sumatran rainforest is being fueled by a global demand for palm oil, the most widely used vegetable oil in the world. In the West most of us are unaware that we consume palm oil everyday. Not only is it found in a surprising number of foods including cooking oil, baked goods, chocolate, potato chips, microwave popcorn, and margarine, it’s also widely used in cosmetics, shampoos, detergents and household cleaners.

On many parts of the island, the dense, verdant jungle, typically teeming with plant and animal life, has been seriously degraded and threatens the survival of many species, including the endangered Sumatran orangutans. They’re forced onto farmlands in search of food putting them at risk for poaching for the illegal pet trade and into conflicts with humans because of damage they do to crops in search of food.

On this trip, the OIC’s goal was to rescue 8 isolated orangutans from a small fragment of forest suffering from greatly diminished sources of food. Ultimately, due to death threats, Suzi and the team had to abort the rescue mission and leave the village in a hurry. They then relocated to the Aceh province, a remote part of the island, where they were able to successfully evacuate one female, and release her into the Gunung Leuser National Park where the rainforest habitat is still intact. 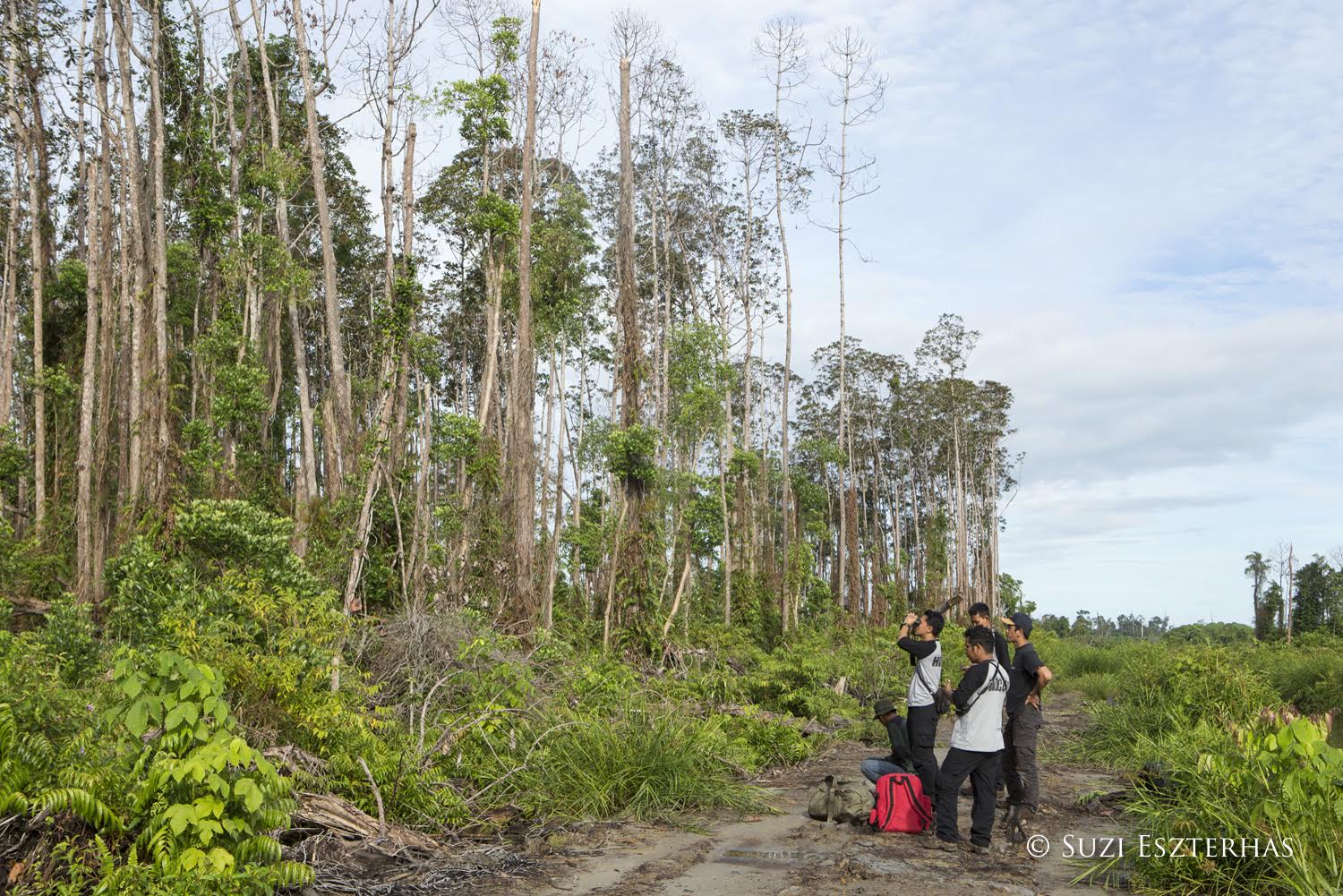 The rescue process is a harrowing endeavor that includes frightening the animal up into a tree so they can shoot her with a tranquilizer dart. (If the tree is too tall the team risks injuring the orangutan when she falls to the forest floor.) Once she’s sedated they hoist her into a cage to transport overland to a safe location, wait for her to come to and watch her make her way back into the jungle. 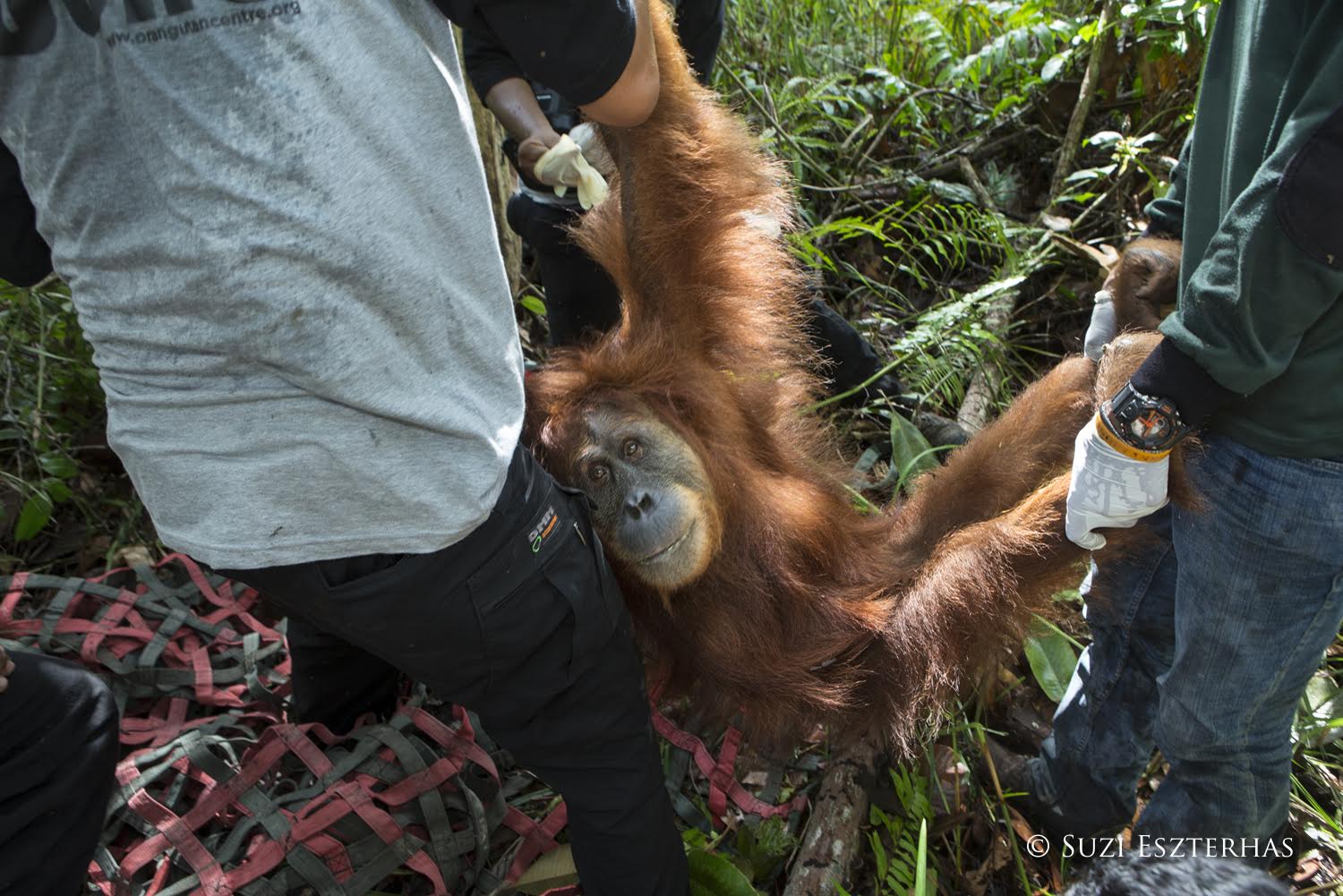 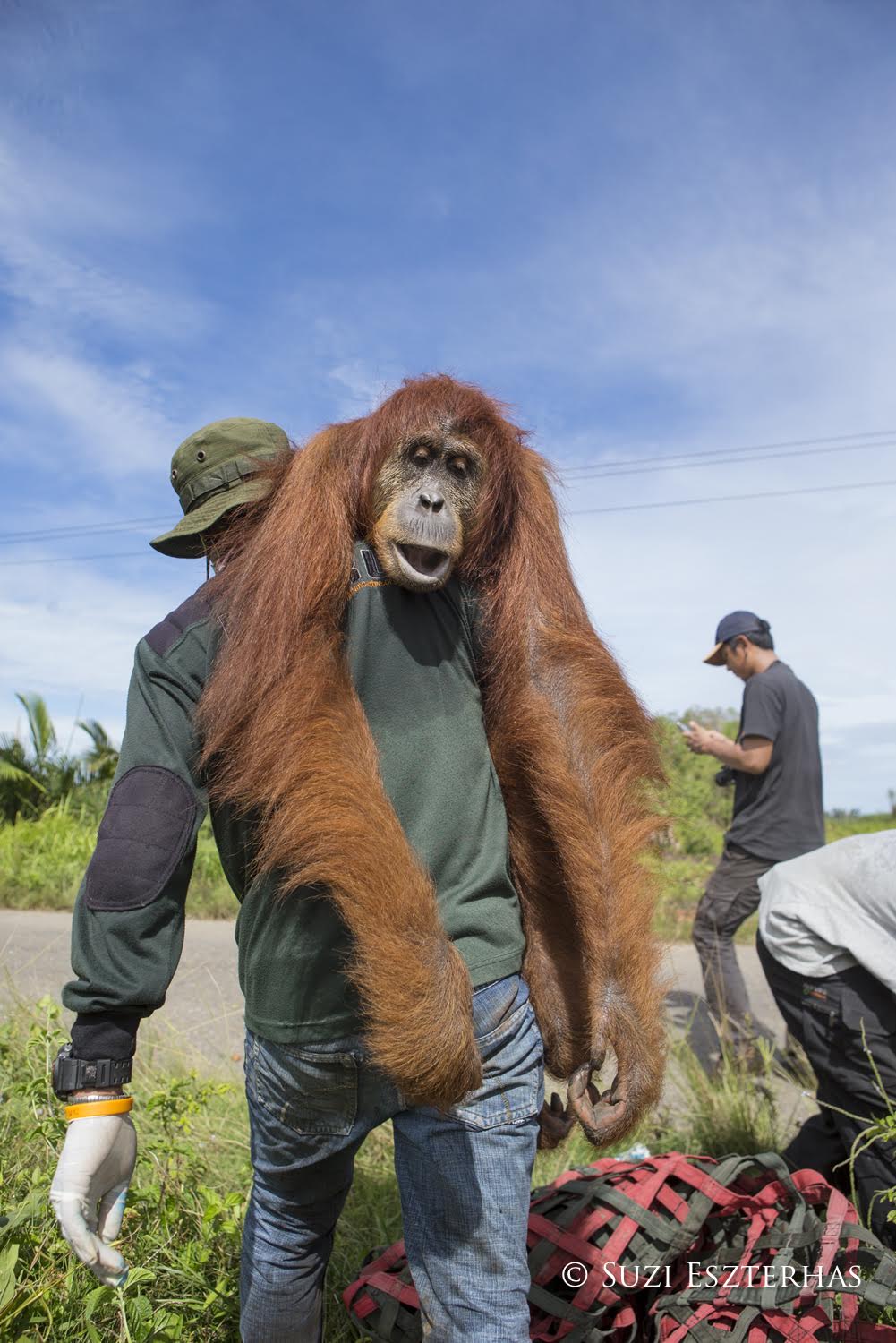 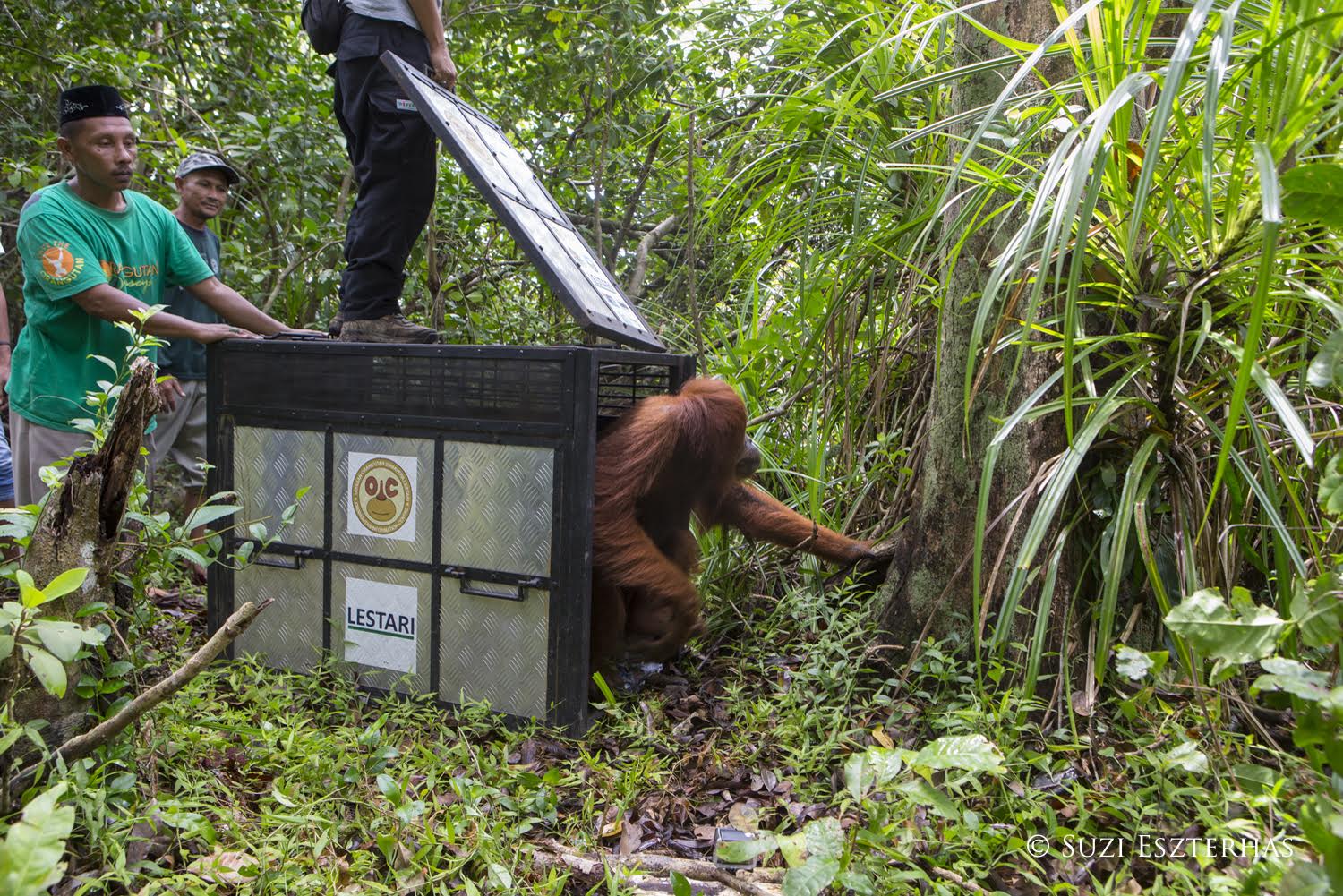 Suzi’s photographs of the rescue mission not only document the brave and compassionate work by the team from the OIC, as well as the work of SOS, they help increase public awareness of their efforts to save this magnificent animal. She plans to return to document more rescue work in the future.