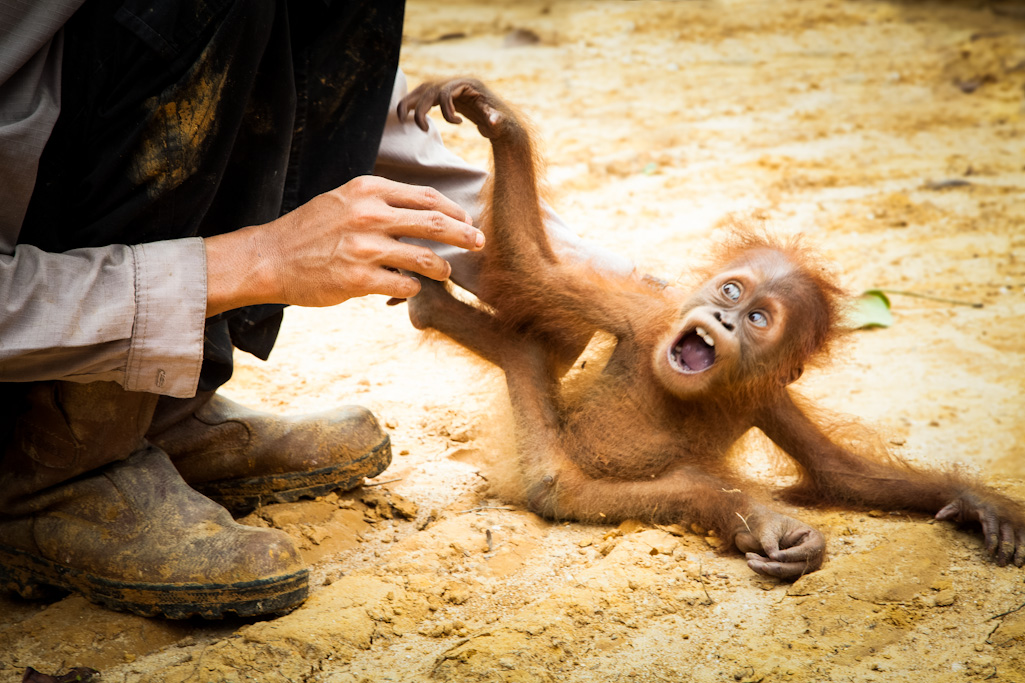 We are pleased to announce the culmination of a four-year-long battle to hold a palm oil company to account for tearing down orangutan habitat.

More than four years after we made an official complaint against one of its members, the Roundtable on Sustainable Palm Oil (RSPO) has today confirmed the expulsion of PT Ibris Palm, whose subsidiary company PT Sisirau is responsible for the destruction of orangutan habitat in Sumatra, Indonesia.

While this is a welcome move, the length of time it took to resolve the complaint against this company – which is connected to the highest levels of the industry – raises serious questions about the efficacy of the complaints process.

The RSPO is a body which regulates certified sustainable palm oil according to a set of principles developed by palm oil growers, traders, buyers, retailers, banks and social and environmental organisations, designed to limit the negative environmental and social impacts of the industry.

In 2012, seven orangutans were evacuated from an oil palm plantation managed by PT Sisirau in Aceh province, Sumatra. SOS filed a complaint with the RSPO, submitting evidence that the company had continued to bulldoze patches of forest even after being alerted to the presence of orangutans within the plantation, in direct contravention of RSPO guidelines. Whilst RSPO members continue to destroy forests and put critically endangered orangutans at risk, the reputation and credibility of the entire organization and process is called into question.

“We welcome the RSPO’s decision to terminate PT Ibris Palm’s membership. Companies which claim to be committed to responsible palm oil production whilst continuing destructive practices must be held to account. PT Sisirau had been a member of the RSPO since 2008, and its parent company, Ibris Palm, since 2011, but neither had been certified as producing sustainable palm oil – and the RSPO’s ruling on our complaint ensures that they never will be. This ensures that they will be excluded from the global market, which is moving steadily towards a rejection of palm oil that has been produced at the expense of forests, biodiversity and local communities.”

One of the Directors of PT Sisirau is Joefly Bahroeny. He is also the Chairman of GAPKI, the Indonesian Palm Oil Association. GAPKI is an umbrella body for the Indonesian palm oil industry, representing 674 member companies.

Mr. Bahroeny was personally informed of the presence of orangutans, a protected and critically endangered species, within the plantation under his management, yet the bulldozers continued their work, tearing down the remaining forest, ready to be planted with oil palms. The expulsion of one of Mr. Bahroeny’s companies from the RSPO links him to one of the most serious criticisms of the palm oil industry at large, namely the destruction of natural forests which provide vital habitat for critically endangered species such as the Sumatran orangutan.

SOS established the only orangutan rescue team in Sumatra with our partner organization, the Orangutan Information Centre, in 2010. To date, they have rescued 110 orangutans from isolated forests and the illegal pet trade. Orangutan rescues and translocations carry extreme risks for the animals and people involved, and are only carried out as a last resort if orangutans are considered to be in danger of starvation, injury or death.

All seven orangutans that were evacuated from PT Sisirau’s plantation in 2012 were safely released into the Leuser Ecosystem, a protected area and the last stronghold for the species.

Of course rescues alone are not the solution. Our projects and campaigns tackle the most urgent threats facing Sumatran orangutans and their habitat. Our partners in Sumatra work on the frontline of orangutan protection, helping animals in peril to have a second chance at a life in the wild. With so few Sumatran orangutans left, every life is precious. Working with local communities, businesses and government to tackle the root causes of deforestation is crucial if we are to save orangutans and the many other species sharing their rainforest home.

This win is the culmination of four years of persistent lobbying by SOS for the RSPO to take decisive action against PT Sisirau. This company’s actions are by no means unique in an industry which is notorious for driving forest destruction. SOS strives to break the link between development and deforestation in Sumatra, and the success of our efforts to hold this company to account is a crucial step towards this goal.