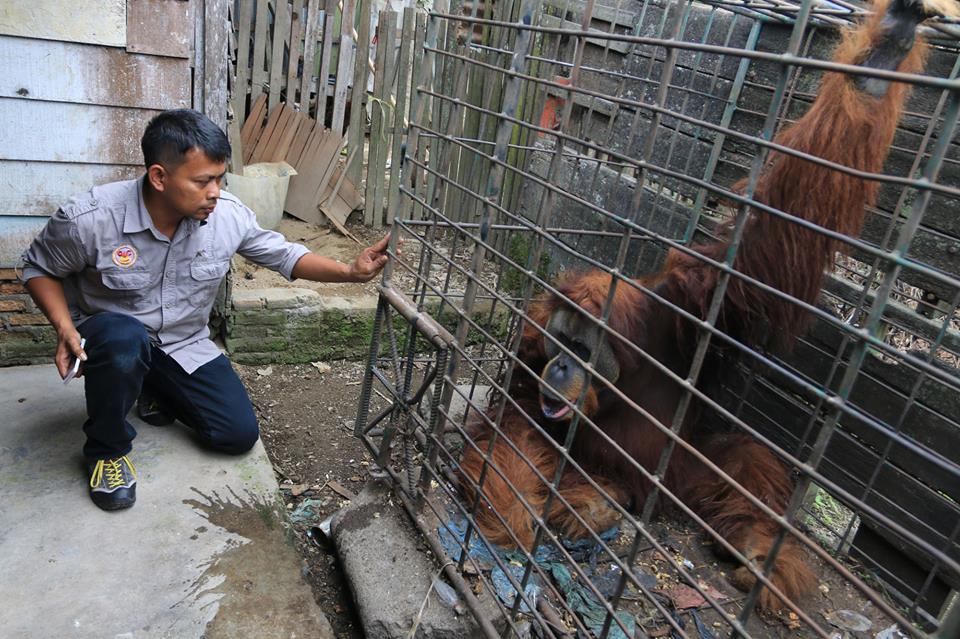 On May 30th 2016, the Human Orangutan Conflict Response Unit rescued a very large male orangutan locked in a small cage in an army complex in Kabanjahe, North Sumatra. The orangutan, estimated to be 20 years old and named Krismon by the ‘owner’, was taken from his mother in 1997 (she would undoubtedly have been killed during his capture) and given to an army commander who then kept him in his home as a pet.

When Krismon grew into an adult, the owner locked him in a small cage. The team had persistently investigated this case since the end of last year and finally found Krismon being kept in terrible conditions. Surprisingly, Krismon was found in good health and has been handed over to the Sumatran Orangutan Conservation Programme (SOCP) care centre in North Sumatra. He is now undergoing thorough health checks – it is not known at this stage whether he will be able to return to the forest, after almost 20 years in captivity.

“He has never learnt to make a nest, or to climb high trees to forage, but now he is at the quarantine centre, he may learn quickly, so you never know,” Panut Hadisiswoyo of the Orangutan Information Centre said. “If not, he will be able to go to the new Orangutan Haven being created by the SOCP. It would still be a wonderful life for him compared to what he has suffered so far.”