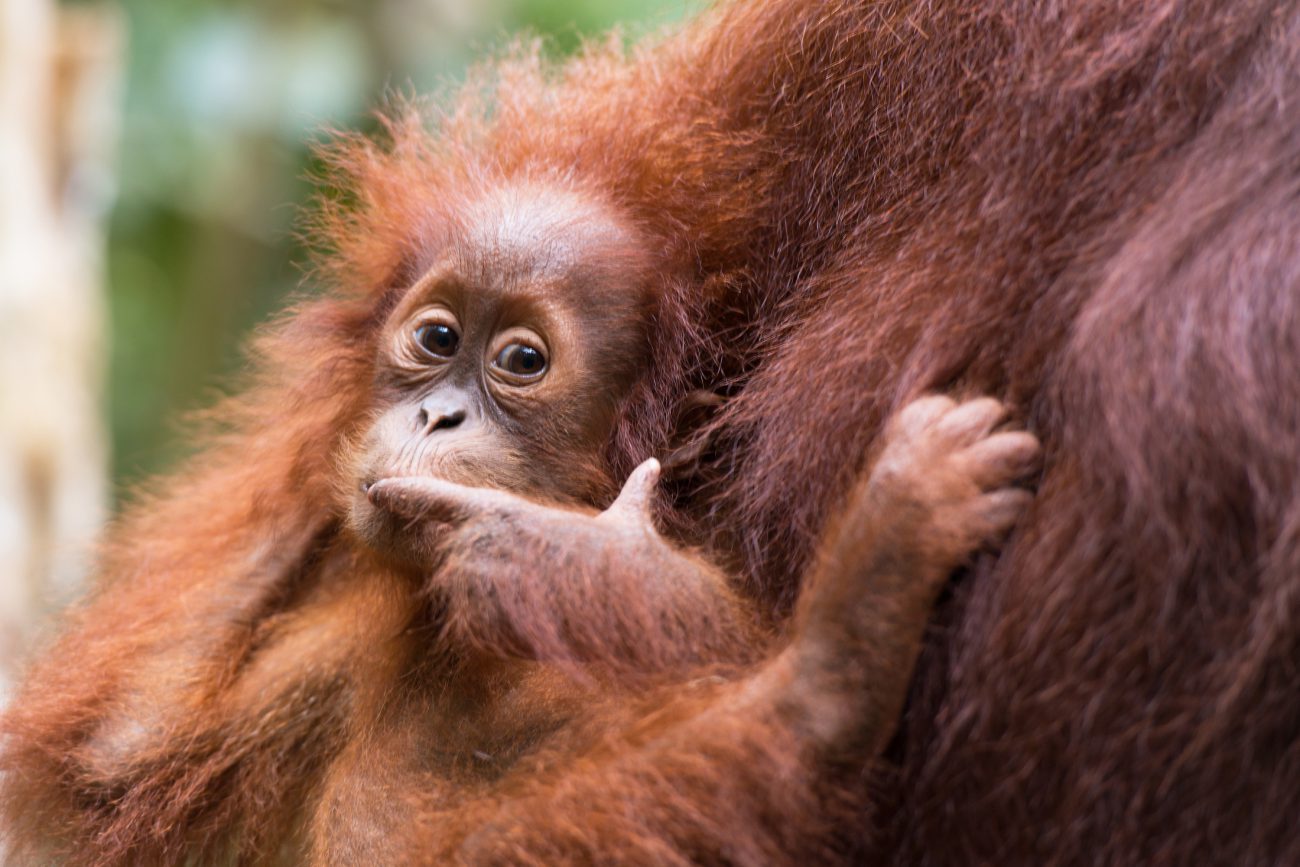 What species are they?

The orangutan is one of our closest relatives in the animal kingdom, sharing 96.4% of our DNA. Indigenous people of Indonesia and Malaysia call this ape "Orang Hutan" which literally translates as "Person of the Forest".

Once widespread throughout the forests of Asia, orangutans are now found on just two islands, Sumatra and Borneo.

There are three genetically distinct species: the Sumatran orangutan (Pongo abelii), the Tapanuli orangutan (Pongo tapanuliensis), and the Bornean orangutan (Pongo pygmaeus). The three species look slightly different: Sumatran orangutans have lighter hair and a longer beard than their Bornean relatives, and Sumatran males have narrower cheekpads. Tapanuli orangutans have smaller heads. All species are highly endangered due to habitat loss and poaching. 100 years ago there were thought to be 315,000 orangutans in the wild. There are now less than 14,600 left in Sumatra, and less than 54,000 in Borneo. There are only 800 Tapanuli orangutans left, making them the most endangered Great Ape species in the world. They were only identified as a distinct species in 2017 and live in an area of forest known as Batang Toru, which is currently under threat as the site of a proposed hydro-electric dam. It is thought that they may be the first Great Apes to become extinct unless we help to protect them.

How are they unique?

Orangutans are unique in many ways. They are the only Great Ape in Southeast Asia, and the only Great Ape (other than humans) found outside Africa. They are the only 'red' ape, and the only strictly arboreal ape, meaning that they spend their lives in the forest canopy, even building nests in the trees in which to sleep. The other Great Apes (chimpanzees, bonobos and gorillas) do climb and build nests in the trees, but tend to spend their lives on the ground.


Orangutans also differ from the other Great Apes in that they do not live in family groups. The largest family unit is a female and two offspring, and males and females usually meet up only to breed.

Orangutans are a semi-solitary species. The relationship between a mother and her child lasts for many years, but the time spent with other orangutans is limited. Once adolescent orangutans become independent, they will be alone or in the company of other immature orangutans. In the case of females, they frequently return to their mothers to ‘visit’ until they are about 15-16 years old.

Males who are not yet fully mature tend to associate with other females, particularly adolescent females, but are not usually aggressive. Flanged adult male orangutans are the most solitary of all orangutans. Their participation in social groups is usually limited to temporary sexual encounters with receptive females.

This semi-solitary social system may have evolved as a result of a ripe fruit diet, scattered food distribution, and the unpredictability of available food. Orangutans spend up to 60% of their time foraging and eating.

Orangutans have the slowest known life histories of any mammal. They take the longest time to grow up and they are the slowest to reproduce Wild female orangutans usually become sexually active at approximately 12 years, but they will often have their first offspring only at 15-16 years of age.

Male to male competition for access to females is a major factor in orangutan society. Flanged adult males use their pendulous throat sacs as a resonating chamber for the ‘long call’, parts of which sound like a loud roar. Sometimes the sound of a long call can carry for almost a mile.

The gestation period of a baby orangutan is approximately eight and a half months. Usually one child is born, weighing about 3 ½ pounds. Orangutans breed more slowly than any other primate, with the female having a baby on average only once every 7-8 years. Infants are dependent on their mothers for at least five years, learning about survival in the forest.

For the first two years of a young orangutan’s life, the baby is completely dependent on its mother for food and transportation. A baby orangutan clings to its mother’s stomach, side, or back while she moves through the trees, and feeds on her breast milk. Orangutan offspring will sometimes be carried until they are 5 years old and be breast-fed until they are 8 years old. Even when young orangutans are too old to be carried and fed by their mother, they may still remain close to her, traveling with her, eating, and resting in the same trees, until they are about 10 years old.

Orangutans live for around 45 years in the wild, and a female will usually have no more than 3 offspring in her lifetime. This means that orangutan populations grow very slowly, and take a long time to recover from habitat disturbance and hunting.

Such prolonged association between mother and offspring is rare among mammals. Probably only humans have a more intensive relationship with their mothers. Primatologists believe that orangutans have such long childhoods because there is so much that they need to learn before they can live alone successfully. Young orangutans learn almost everything from their mothers, including where to find food, what to eat and how to eat it, and how to build a proper sleeping nest.

Relationship with the forest

Orangutans are the largest arboreal animal on the planet. Most of their lives are spent in trees where they travel from branch to branch by climbing, clambering, and swinging. Over 90% of the food orangutans eat is found in the canopy.

Although mostly arboreal, males in Borneo occasionally travel on the ground to move between stands of trees. In Sumatra this rarely happens and may be linked to sharing their habitat with the Sumatran tiger. While females stay near their mothers’ home ranges during the course of their lifetimes, males may migrate long distances away from their mother’s home range.

Almost every night orangutans construct a new sleeping nest from branches, usually 15 to 100 feet up in a tree. Sometimes orangutans will make a mid-day nest for napping. Occasionally, they will also reuse an old nest, adding new branches.

Orangutans have high cognitive abilities comparable to the other great apes. This high level of intelligence manifests itself in tool-use and even the making of simple tools in the wild. Some tool use is unique, but other kinds of tool use represent cultural traditions in orangutan populations.

Orangutans have been observed making simple tools to scratch themselves. They also use leafy branches to shelter themselves from rain and sun, and sometimes even drape large leaves over themselves. They have also been observed using branches as tools during insect foraging, honey collection, and protection against stinging insects. In Sumatra, wild orangutans use tools to extract seeds from hard shelled species of fruit. 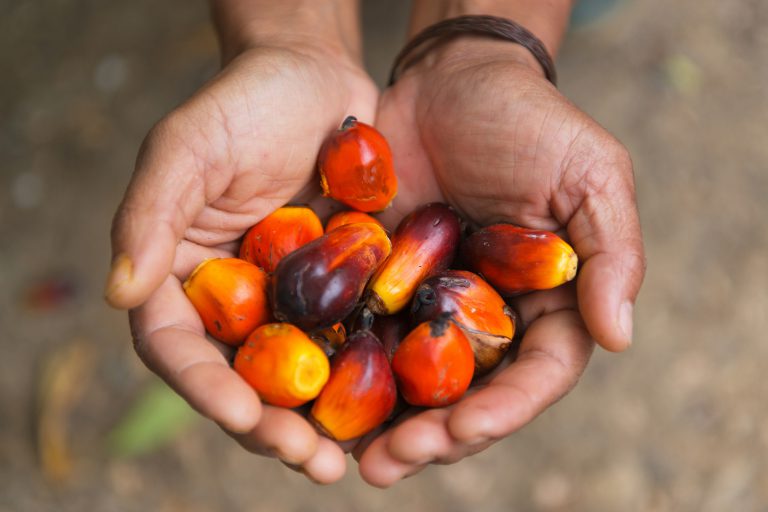