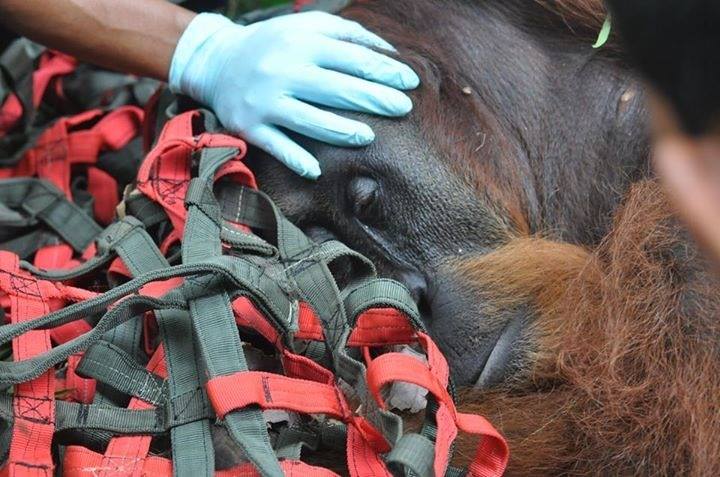 The role of rescue and translocation in orangutan conservation

A joint statement from SOS and OIC.

Recent studies of the outcomes of orangutan rescue projects in Borneo have suggested that removing orangutans from patches of forest in agricultural landscapes can be harmful to both the animals themselves and the habitats they are taken from.

Together with the government wildlife authority, the Orangutan Information Centre (OIC) manages the foremost orangutan rescue programme in Sumatra, actively evacuating wild orangutans from dangerous situations in the field and translocating them to safe forests, as well as confiscating orphan orangutans from illegal captivity and the pet trade. The Sumatran Orangutan Society (SOS) supports this work by raising funds for ongoing operational costs and occasional larger expenses such as vehicles. We would like to reiterate our views about the conservation value of orangutan rescue operations in Sumatra.

Is rescue and translocation good for the welfare of individual orangutans, and does this increase those animals’ chances of long-term survival?

The decision to translocate an orangutan is never taken lightly. Rescue operations are always a last resort and are only undertaken if active forest clearing is taking place or there is credible reason to believe that the orangutan is under other extreme and immediate risk (such as a threat that the orangutan will be shot in retaliation for crop-raiding).

For orangutans that are trapped in patches of condemned forest, actively targeted by bulldozers and chainsaws, the rescue team is literally a lifeline. This has been the case for 107 orangutans that the Orangutan Information Centre’s Human Orangutan Conflict Response Unit (HOCRU) have relocated since the programme started in January 2012. In all these cases, the orangutans were taken out of areas isolated from larger forest blocks, that were at direct and immediate risk, or actively in the process of being cleared. We can confidently state that without such interventions, these orangutans would have had little chance of survival, and those that were not starved or shot would likely have ended up in the illegal pet trade.

Being released into protected forests can certainly be said to increase their short-medium term survival prospects relative to taking no action. As to their long-term survival, we recognise and endorse the need for more research on this question.

How do rescue operations contribute to the conservation of the species?

The HOCRU programme maintains a list of sites with known populations of isolated orangutans that are monitored on a regular basis – it is not the case that all isolated orangutans are (immediately) translocated. The team maintains open lines of communication with farmers, plantation owners and local residents in these areas and conducts ongoing assessments of the threat level to each known individual or small population.

As a critically endangered species, every life is precious. If an individual or small isolated population of orangutans is at direct and immediate risk of starvation, of having the trees bulldozed from underneath them, of being shot or of being captured for the illegal pet trade, then the decision is taken to evacuate and translocate – and give them a second chance to be part of a viable wild population, supporting the survival of their species.

It is extremely important that there are teams in the field monitoring conflict situations and/or isolated forest patches containing orangutans, so that these smaller but still vital populations are not lost. Of course, working to prevent these situations has to be part of any coherent conservation strategy, as discussed below.

We must also acknowledge that conservation endeavours cannot succeed without the engagement of those communities who live side-by-side with wildlife. The presence of the HOCRU teams in landscapes where human-orangutan conflict is prevalent, or at risk of becoming so, is vital to ensure people’s concerns are heard, and solutions created together.

Does removing orangutans from an area of forest make it more likely that the forest will be cleared?

This is a very important question.  As forests fall to make way for farmlands and other developments, we are finding more and more orangutans stranded in agricultural landscapes, including smallholder plantations as well as company-managed concessions. We believe that orangutans and humans can and must coexist, but when individuals or small populations are trapped in forest fragments, with poor prospects of survival, translocation offers an opportunity for those orangutans to once again be part of a viable population.

Where orangutans are found within legal concessions where the leaseholder has permission from the government to clear the land for agriculture, and especially where the companies managing that land have not made any commitment to eliminate deforestation from their operations, the future is bleak for those individuals. As we know, orangutans are not only found within protected forests, and the reality is that these forest fragments will be cleared, whether or not they contain orangutans.

Rescues alone do not solve the larger problems that are driving human-orangutan conflict and dwindling wild populations – namely the clearance and fragmentation of forests. We are the first to acknowledge that translocation is a reactionary safety net in response to the ongoing problem of orangutans being displaced from their shrinking forest homes.  We must back immediate boots-on-the-ground protection whilst simultaneously setting the wheels in motion for long-term solutions for durable conservation – with the protection of intact habitat being absolutely key. This diverse approach offers the best hope for the survival of the orangutan – and this is why we deliver programmes that tackle the causes of deforestation as well as the symptoms.

Orangutan rescue is just one element of a broad conservation strategy that focuses on protecting wild orangutans and their habitat. Indeed, the rescue and translocation of orangutans is just one element of the human-orangutan conflict mitigation programme, which also provides training for rural communities in how to protect their crops and livelihoods without harming wildlife and supports government capacity in dealing with this growing problem.

Taking an evidence-based approach to conservation is a cornerstone of our ethos, and we always seek to be driven by science and impact. SOS and OIC are committed to listening to the science, and all our programmes are constantly evaluated to make sure we are directing our efforts and resources for the greatest possible impact. We welcome this new research on the outcomes of orangutan rescue programmes in Borneo and will examine the findings to determine whether there are learnings that can be incorporated into our work in Sumatra.

Please join us in striving for a safe future for orangutans in the wild.