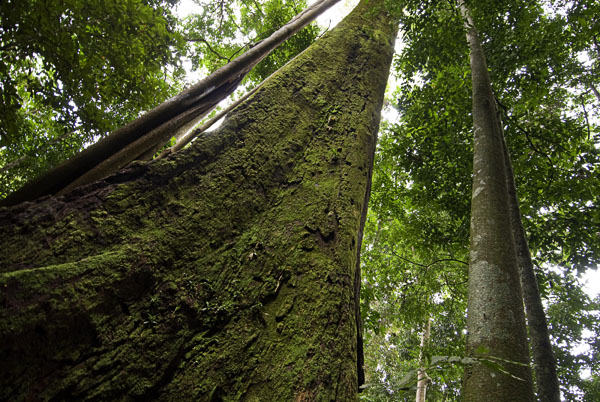 Andrew Callender has been supporting SOS for more than 6 years. His trip to Sumatra in 2011 gave him first-hand experience of the threats we’re working so hard to tackle, and the incredible wildlife and forests we’re protecting.

May 2011 and I was trying to get some sleep on a concrete floor in an oil palm plantation in northern Sumatra. The air was dry and suffocatingly hot, so very different from the cool of the forest community where we had stayed the day before. Just a few kilometres distant from each other, but the two villages were situated in environments that felt worlds apart. Indeed, almost the only thing they had in common was the concrete floor!

Perhaps I really was too old for all this: the year before I had left a career in investment management to try to carve a (second) career working in the environment. An introduction to Helen at the Sumatran Orangutan Society in Oxford quickly led to a plan to visit Gunung Leuser National Park. The aim was to assess the differing attitudes of local communities to the work of SOS and its local partner, the Orangutan Information Centre (OIC), and to the forest overall.

It is difficult to get a real sense of the size of Leuser: the forests disappear into the folds of the hills, rising up from the flatter land of the valleys and plains that has almost entirely been lost to cultivation. Some sense of the scale of what was once forest, however, is evident as one drives through endless oil palm plantations. It is, however, the park’s size of more than one million hectares that is so important. This is the very reason that populations of large mammals still persist (though largely unseen) and large bird species such as wreathed and helmeted hornbills can still occasionally be spotted. Without protection of the whole ecosystem, such large species will become increasingly isolated and unviable.

I spent three weeks speaking with many different villagers – almost without exception, they articulated the benefits that the forest bring: cooler temperatures, reduced flooding, soil stabilisation and cleaner water. And some were well-versed on the (in 2011) recently announced deal on deforestation between Norway and Indonesia, though they held no hope that it would benefit them. But employment is scarce, incomes desperately low and land at a premium. It is that classic dilemma – a recognition of the benefits of natural assets, but with little prospect of local communities accruing any direct benefits to give them much-needed income.

This issue, however, was alleviated for those communities or individuals that embraced the projects that OIC, with SOS’s support, were championing. For some this meant better agricultural yields and a reduced need to clear more land; for others it meant employment in reforestation work, tending nurseries and re-planting trees, to restore the damage done by illegal oil palm plantations. And looking at recent pictures of the reforestation project at Besitang now, the great thing about high rainfall/high temperature areas is that trees really do grow fast!

For these communities, this employment and opportunity clearly makes a huge difference. The greatest risk for them is that the funding that we supply dries up. I still always intuitively like the idea of giving money to specific projects – after all, who would not feel proud helping to fund directly the orangutan rescue team whose work is so extraordinary in such difficult circumstances. But providing security of funding over a long period of time, is also of great importance and with that in mind I have recently added direct debit monthly giving to my contributions. There is no shortage of forest to restore and habitat to protect and with greater certainty of funds, so the teams at SOS and OIC can plan for the future.

And, to be sure, contributions really do go directly to the front line: remembering those concrete floors convinces me of that!

If, like Andrew, you want to make a regular contribution to our work, it takes just a moment to set up a monthly donation online.